The first Dan Brown novel I read was of course Di Vinci Code, from there I binge read Dan Brown’s entire literary catalog. Each time a new shiny Robert Langdon book came out I made sure to put a hold on it. The last Dan Brown book that graced my library hold list was Inferno. While I was reading Inferno I felt like I was watching the Bill Murray movie Groundhog Day. The same story framework with a few new characters thrown in. It entertained me but didn’t blow the wind up my skirt. So when my library hold for Origins came up I decided to give it another go. Needless to say it was a entertainment for a lazy winter weekend; but I felt  like I was Bill Murray the same day over and over again. 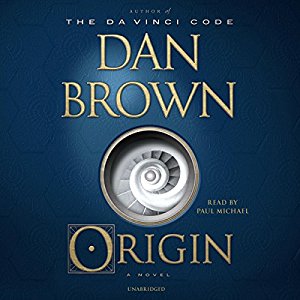 Summary:  Robert Langdon and a female protagonist race against the clock and the bad guys to share a secret with the world.

What I liked: Dan Brown’s writing is fast paced which makes Origin an easy and fast read. Robert Langdon is like a warm and comforting blanket; it helps that whenever I think about Robert Langdon I picture Tom Hanks. I also liked Winston’s role in the story (I am not going to give away the spoiler as too who Winston is).

What I didn’t like: The book is written to a formula like the other Robert Langdon books. I’ve always liked the puzzle aspect of the Robert Langdon stories. There wasn’t a lot of puzzle solving in Origin. It felt like an Artificial Intelligence 101 class.

It was a fun and comforting winter weekend read.